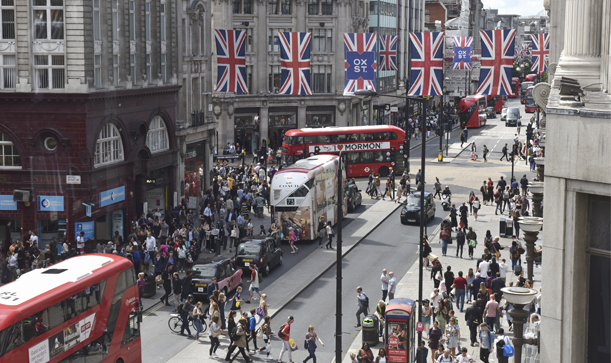 Retail contributes approximately £7 billion of business rates annually– nearly a quarter of all business rate receipts, and far more than any other industry and disproportionate to our six per cent share of the economy (Gross Value Added). Property tax as a proportion of total taxation is nearly 13 per cent in the UK – twice the EU average. A lower level of property taxation that is competitive compared to other OECD and European countries would encourage growth in local communities across the country.

The BRC played a central role in the past two years underpinned by an extensive campaign, high profile public correspondence with two different Chancellors, other members of the Cabinet and MPs and extensive media coverage across a range of media outlets.

In the lead up to the November 2017 Budget we led a coalition of business groups urging government to take action to avoid a nearly four percent increase the following April and the Chancellor listened and brought forward CPI indexation worth £210 million to retailers in the first two years. Government also ruled out self-assessments of properties which would have caused serious questions of fairness and complexity.

At the March 2017 Budget the Chancellor announced £435 million in business rates relief designed to assist those companies most affected by the 2017 revaluation to be financed from central funds and not from a redistribution within the existing revaluation settlement. The BRC also shared its concerns regarding the proposed transitional arrangements following the 2017 revaluation resulting in £35 million in savings for retailers. The Government also modified the proposed requirement that any valuation to be amended would need to be “outside the bounds of reasonable professional judgement” to instead rely on the Valuation Tribunal to judge whether the valuation constitutes a “reasonable valuation” providing greater flexibility in the consideration of appeals.

In March 2016, the Government announced that from 2017 the Small Business Rates Relief (SBRR) scheme would be expanded, the threshold for the standard multiplier would be increased to £51,000 of Rateable Value (meaning all hereditaments valued below that do not pay the 1.3p SBRR supplement). It also committed to more frequent revaluations and a switch from RPI to CPI indexation from 2020 which it more recently brought forward to April 2018. Importantly, the Treasury agreed with us that all these reforms would not be paid for within the business rates system. Also as a result of our work, the Government is modernising the administration of business rates by introducing more frequent business rate revaluations from 2022 and has committed to overhaul billing and collection to include linking to HMRC digital accounts.

While we have indeed achieved a lot, we have not got all that we were seeking. Going forward, we remain committed to progressing fundamental reform as well as improving upon the Check, Challenge and Appeal system and ensuring new requirements for ratepayers are workable and effectively achieve three-yearly revaluations.

The BRC should be congratulated for your consistent lobbying on this topic. It is a positive step for retail in general.

Please get in touch.