The Art of The Possible: KPMG Alumni Interview with BRC's CEO, Helen Dickinson

The British Retail Consortium's Chief Executive and former KPMG Partner, Helen Dickinson had the opportunity to feature in the latest issue of KPMG's Former Partner Newsletter. Read the full interview below, in which Helen lifts the lid on the events that unfolded before and during lockdown, discussing how ‘online was a lifeline’ and highlighting the amazing hard work of retail staff who stepped up during the crisis.

Just after 2:00pm on Saturday 21 March, two days before Boris Johnson addressed the nation and announced that all shops selling non-essential goods would close, Helen Dickinson, CEO of the British Retail Consortium and KPMG Former Partner, stood behind the lectern at Number 10 and delivered a vital message to the 25 million UK consumers that had turned off Netflix to watch the live daily press briefing. “There’s plenty of food in the supply chain, the issue is around getting the food onto shelves”. Helen was providing both the voice of retail and reason.

The plea for consumers to only buy what they need will most certainly have helped to calm the frenzy, but as she explains, the intense work to respond to the crisis was already well underway weeks before the lockdown, and in the subsequent 6 weeks, she was literally on the phone 24/7. “The pace was phenomenal; we convened groups of retailers to identify what needed to change in order to free-up the supply chain, and there was constant dialogue with government to push through critical changes, such as suspending parts of competition law, as well as shaping and extending JRS and helping to get the various loan schemes up and running. What normally takes 7 years was being achieved in 7 weeks!”

Despite such rapid achievement, Helen is quick to point out that it shouldn’t take a crisis to allow such good collaboration to take place with Government, and there’s a clear sense that she will not be allowing progress in this space to dissipate anytime soon, “this is how it should be, and now can be, moving forward”.

Helen points out that the live debate right now is the 1 metre vs 2 metre social distancing rule, the outcome of which will have a huge impact on the economic viability of serving customers and the burden of implementing protection measures, “The sooner the government is able to move safely to a smaller distance the better”.

Surprisingly, before taking up the mantle of Chief Executive for the BRC, a job title she changed herself from the somewhat more ostentatious title of ‘Director General’, Helen never saw herself as someone with a penchant for lobbying or political activism. Having joined Peat Marwick McLintock in 1989, and after two years in general practice, she found herself auditing mainly retail clients. Having gained an in-depth working knowledge of the sector, she progressed to become Partner in 2002 and was later appointed as the Head of Retail in 2004. But it was by no means plain sailing. Helen didn’t pass her Partner panel the first time around. This was clearly a moment for her to reflect and reset, and she quickly picked herself backup. After 8 years of leading KPMG’s Retail practice, a surprise phone call from a head hunter back in 2012 set in motion the next leg of Helen’s career.

Sir Ian Cheshire, the incoming Chair of the BRC at the time, interviewed Helen for the role. She recounts how it was a typical interview up until half way through, after which, it became more of a discussion about why the role was such a big opportunity. A formal offer was received shortly afterwards. By her own admission it was a risky move and one that she thought long and hard about. “It was actually a client that gave me the best career advice… which was simply a question: ‘What is your head saying, and now what is your heart saying’. I haven’t looked back since”.

So we discuss looking forward to what lies ahead for Retail and the new normal. The good news is that there’s reason to feel positive according to Helen. “Online has been a lifeline, and we’re seeing technology and digital transformation programmes rise to the top of the agenda. The new agile business models and ways of working are also here to stay”.

One of most surprising and positive shifts to come out of all of this, Helen points out, is how our retail workers are now seen as key workers by the politicians and the public. They’re not saving lives like the NHS of course, but the people that worked in the food industry and other parts of online retail, by anyone’s account, really stepped up, “they supported us through this time of crisis while many of us were leading largely uneventful lives from our homes”.

Speaking of homes, Helen’s web cam shows a backdrop that is modern and undoubtedly cool. It turns out that she moved into a new apartment near Smithfield Market just before lockdown. So how has she adapted to lockdown life? Helen’s honesty is as refreshing as it is comforting.

“I’m very lucky that I managed to move when I did, I just wish I could invite friends over for dinner! It’s a strange time right now. Speaking to people 12 hours a day on the laptop is fine, but I would just love to go out to the pub. I was OK after 4 weeks and even 6, but 12 weeks is tough. It’s the monotony of it really, and yes, I have bad days.

On the positive, I’ve learnt a lot about myself and what I’m capable of doing. I don’t think I’ve ever worked so hard, but I’ve got a great team at the BRC, and we’ve collectively done more in the last few weeks than ever before. It’s made me realise the art of the possible.”

For Insights on COVID-19 from KPMG 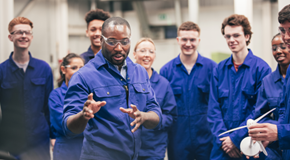 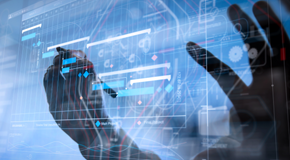 Leadership Considerations in the New Normal