Climate change is one of the most pervasive and threatening crises of our time. It reaches every corner of the globe and without urgent action to shift from the current path we will face devastating consequences with implications for where we live, how we grow food, and how we provide other services vital to wellbeing.

Today the impacts of a 1.1°C increase in temperatures above the pre-industrial period are already apparent. 2019 concluded a decade of exceptional global heat, retreating ice, and record high sea levels, driven by anthropogenic greenhouse gas emissions.

Figure 1.3a: Representation of warming in the post-industrial period,
from National Centre for Atmospheric Science.

The Paris Agreement sets out a global framework to avoid dangerous climate change by limiting global warming to well below 2°C, and pursuing efforts to limit it to 1.5°C. It also aims to strengthen countries’ ability to deal with the impacts of climate change. It is the first-ever universal, legally binding global climate change agreement, and was adopted at the United Nations Climate Change Conference (COP21) held in Paris in December 2015. The EU and its Member States, including the UK, are among the 189 Parties to the Paris Agreement, and the EU formally ratified the agreement in October 2016, enabling its entry into force on 4 November 2016.

Under the Paris agreement, governments agreed:

A consensus has emerged since 2015 that a 1.5°C target is the ‘safe’ upper limit for climate change, with the latest science predicting that a 2°C world would see more than double the incidence of extreme heat events, make species loss 2-3x worse, and have a 2.3x worse impact on crop yields.[2] The national pledges made as part of the Paris Agreement will be updated and reviewed at the COP26 Conference in Glasgow in 2021. To prevent warming beyond 1.5°C, global emissions need to be reduced by 7.6% every year to 2030.

In the UK, governments have set legislative targets to reach net zero greenhouse gas emissions. Beginning with an initial target of 80% reduced emissions by 2050 in the Climate Change Act 2008, the UK has been a leader in decarbonisation policy. Since then, the UK parliament passed legislation to achieve net zero by 2050, the Scottish Government has set a 2045 net zero emissions target, and in Wales the Government has set targets to reduce emissions by 95% by 2050.[3] Meanwhile many local authorities across the UK have declared a climate emergency and are adopting initiatives to reduce greenhouse gas emissions.

The UK has established key milestones called carbon budgets, describing the progress the country needs to make in decarbonisation. According to the Committee on Climate Change the UK is on track to meet the 3rd carbon budget (2018-2022) but is off track in meeting the 4th (2023-2027) and 5th budgets (2028-2032).[4] Crucially, these budgets were set against the previous target of an 80% reduction in emissions by 2050. The 6th carbon budget (2033-2037) is due to be published in December 2020 and will set more stringent targets in order to meet the new net zero goal, meaning there will need to be a step change in action. Progress on decarbonisation will need to accelerate to meet the 4th and 5th carbon budget levels, and the more stretching 6th target. 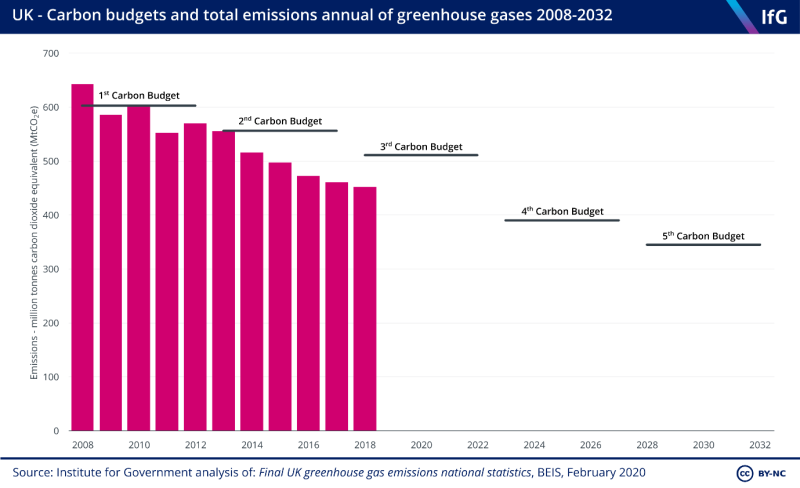 Figure 1.3b: UK carbon budgets to 2032, from the Institute for Government

Establishing an adequate global framework, with national commitments and action sufficient to deliver decarbonisation, is critical. But alongside action at a national level, the role of large, medium and small businesses is vital to ensuring that such commitments are delivered. This roadmap is intended to provide concrete guidance on the path to decarbonisation of a key sector of the UK economy, in support of the UK’s overall decarbonisation effort. It is hoped that in establishing an ambitious plan for the UK retail industry and its global supply chain, we can also help to accelerate decarbonisation in other jurisdictions and industries.

[2] IPCC Special Report: Global Warming of 1.5°c (2018)
[3] This is lower than the overall UK target due to higher agricultural emissions in Wales that are challenging to reduce.
[4] Committee on Climate Change (CCC)

Share
Print
Back to the top
Previous 1.2 The UK retail industry
Next 1.4 Business response