Carbon pricing is generally a market-based strategy that can be used to reduce emissions by placing a penalty fee on greenhouse gas emissions. The idea is that polluters must pay a certain cost per tonne of carbon dioxide equivalent emitted, and the price signal created by this, “shifts consumption and investment patterns, making economic development compatible with climate protection”.[16]

Internal carbon pricing, by contrast, is when businesses apply a voluntary cost of carbon within their own operations. This can either be in the form of a shadow price - wherein a theoretical cost of carbon is added to each transaction to highlight environmental impacts and inform financial decisions - or by an actual internal carbon tax, wherein business units are charged a real fee for every tonne of carbon dioxide emitted, with the proceeds then contributing to a ‘climate change fund’ used to invest in emissions reductions across the business. Such internal carbon prices are increasingly being used and are seen as key levers for change – in 2017, according to CDP, nearly 1,400 companies (including over 100 of the global Fortune 500) had adopted, or were planning to adopt internal carbon pricing within the next 2 years.[17]

Unilever has been using internal carbon prices since 2016, with the price rising from €30 to €50 per tonne CO2e in the past 4 years. Unilever initially used a shadow pricing scheme (wherein the costs of emissions are tracked but not actually charged to the business), however failed to see change as their energy costs were relatively low compared to capital costs. The company now ‘charges’ its business units a notional carbon tax by deducting the cost of emissions from each unit’s annual capital budgets.

The internal ‘tax’ is based on the unit’s scope 1 and 2 emissions for the previous year and the companywide internal carbon price. Proceeds contribute to a Clean Technology Fund to support on-site renewables, waste reduction, and energy and water-saving projects. They estimate that the internal carbon tax has so far contributed ~€120 Million to the fund, and prevented 1,500 tCO2e[18].

One of the company’s subsidiaries, Ben & Jerry’s, has used a different approach. Ben & Jerry’s has attached an internal price of carbon to every tonne of emissions in the value chain, including emissions associated with agricultural raw materials and end of life treatment for products, since 2015. The funds generated by this internal fee are primarily used to help partner farmers reduce their carbon footprints.[19]

External carbon prices in Europe are currently governed by the EU ETS (Emissions Trading System), which is a cap-and-trade system under which a limit is set on the total amount of greenhouse gas emissions allowable, and businesses must trade ‘emissions allowances’ within this limit. The limit is reduced over time so that total emissions fall, with an associated increase in the traded cost of carbon (this had risen to €28.13 per tCO2e by the end of August 2020). The ETS only applies to certain carbon intensive sectors – meaning that the retail sector is not directly impacted, although it is indirectly impacted due to its interaction with industries such as the heat and power, pulp and paper, and aluminium production sectors. The UK does also have a number of varying carbon prices across different sectors, although the latest Institute of Government report suggested that these should be reviewed by the Treasury, as the wide range of prices “creates confused signals”. 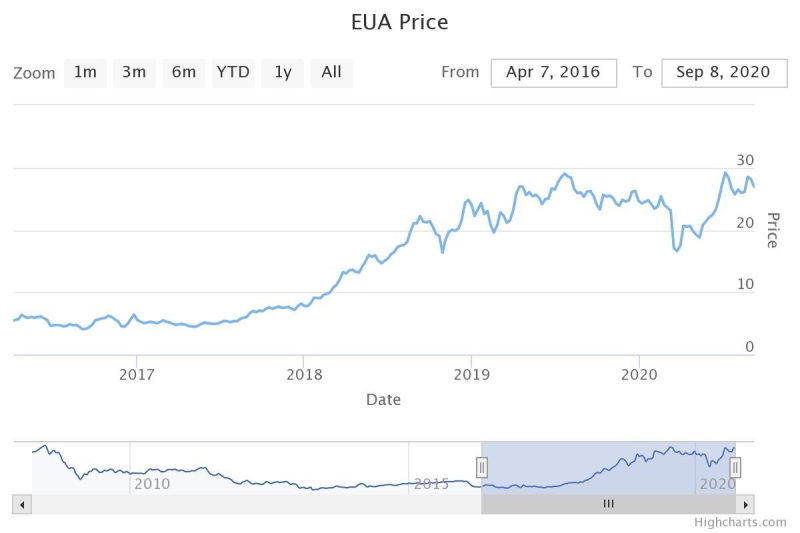 On December 31st 2020, the UK leaves the EU ETS, and currently plans to set out a similar UK ETS linked to the EU ETS, as recommended by a 2019 report from the Committee on Climate Change and Vivid Economics. If this is not possible, the report recommends either a standalone UK ETS, with an allowance price starting at £30-£50 per tCO2e, or a simple carbon tax starting at £16 per tCO2e and quickly rising to align with the EU allowance price. BEIS calculations suggest that a price of £80 per tonne by 2030 is “the ideal level to reduce emissions by 80 per cent from 1990 levels”.

While uncertainty on the regulatory environment remains, setting an internal carbon price is useful for de-risking businesses against any future changes to carbon price legislation, but also as an efficient mechanism for driving change. With a number of organisations already adopting internal pricing, there are currently a range of prices and mechanisms being chosen – with more ambitious organisations generally opting for higher prices and internal carbon taxes rather than shadow prices.

Joint guidance from CDP, Ecofys and Generation Foundation can be found in the How-To Guide To Corporate Internal Carbon Pricing.

Share
Print
Back to the top
Previous 4.1.3 Supplier engagement
Next 4.1.5 Offsetting and carbon re…