Mitigation and reduction of greenhouse gas emissions must be prioritised as methods of reaching net zero, meaning that carbon offsets should only be considered for emissions that are unfeasible to be eliminated. A net zero claim should only be made when residual emissions are considered unviable to eliminate, and these have been offset via high quality mechanisms.

The diagram below shows an example reduction and offsetting pathway. Emissions are compensated and/or neutralised while science-based reductions occur, but net zero is not claimed until all feasible reductions have been implemented and residual emissions are neutralised. 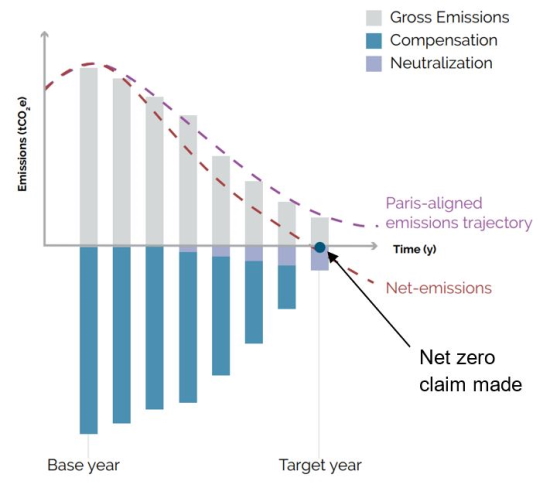 The concept of paying to fund projects to offset remnant emissions has been long established. However, the merits of doing so have been hotly debated, with concerns raised over both idea that offsetting legitimises continued emissions, and around uncertainty of the efficacy, additionality, and permanence of offsetting projects. More recently, there is ongoing discussion around the relative merits of reducing GHG emissions via projects such as energy efficiency and renewables, versus the need to remove existing carbon from the atmosphere.

Carbon offsets remain a fluid and rapidly evolving topic, with definitions and standards under an on-going process of review and refinement. As such, for the launch of this roadmap, it has been agreed with the Steering Group that efforts should not be made at this stage to attempt to prescribe the acceptable standard on such a dynamic issue. This sub-section of the Roadmap therefore provides current context, with the expectation that the industry will work to agree its position on offsetting and carbon removals in due course, in part through the BRC Working Group for Pathway 1.

Voluntary carbon offset markets remain relatively unregulated in the UK, with HMRC’s internal manual stating that “there are no overarching or compulsory standards or methodologies for creating credits (although there are a number of voluntary standards emerging), and there is no formal requirement to register or retire credits (although some of the voluntary standards do have their own registries).” It appears however that the UK and the world at large is entering a new era of offsetting, with demand for offsets reaching a seven-year high in 2019 as offsets are increasingly integrated into net zero plans. Forecasts for future offset costs per tonne CO2e indicate significant increases as demand (e.g. from airline industry) outstrips supply.

As a result, it is important that offsets are carefully managed to avoid potential risks such as leakage, lack of permanence and lack of additionality. Guidance on high quality offsets recommends that companies looking to offset should ensure that offsets are:

Finally, when high quality offsets have been purchased and retired, their impact should be recorded separately to any residual emissions, rather than giving a simple net emissions figure. This is to ensure reductions are considered separately to offsets, and to avoid mitigation deterrence.

There is debate around the extent to which companies’ offsetting activities should prioritise carbon removals versus compensation at the current time, especially as many carbon removal technologies are still nascent. This is an issue that should be covered by the BRC Working Group. There is, however, growing recognition that carbon dioxide removals (CDR) may need to become a widespread component of international efforts to reach net zero, due to residual emissions and slow CO2 mitigation efforts to date.[20]

National and international CDR frameworks are still in development. There is limited consensus on the best pathway to invest in and implement these techniques, but retailers can benefit from the guidance of a recent New Climate Institute report on supporting CDR. New Climate recommends limiting CDR measures to those that meet the following criteria:

While some CDR projects can be classed as offsets in certain marketplaces, New Climate recommends keeping targets to mitigate, offset, and remove emissions separate. In other words, the hierarchy of mitigating to the greatest possible degree first, and offsetting residual emissions second, should be preserved.

A new set of principles published by researchers at the University of Oxford argues that carbon removal should be prioritised over other types of offsetting. The four Oxford Principles are:

However the Oxford approach is not without its critics, many of whom argue that while carbon removal is likely to be a necessary part of the picture, we should not rush too fast towards unproven carbon sequestration technologies at the expense of more traditional offsetting measures that are still proving valuable at this time in driving emissions reductions. We expect this to be a fast-evolving, keenly debated topic in the coming years.

Share
Print
Back to the top
Previous 4.1.4 Internal carbon pricing
Next 4.2 Key initiatives