For the retail industry

Developing an understanding of value chain emissions, setting clear targets, and creating a clear plan of action are vital first steps for retailers on their climate journeys. Retailers may be at different stages in these processes, with varying levels of internal know-how on carbon, and varied priorities throughout the business. The following actions are intended to provide a solid basis for retailers to move forward in the short term.

A rigorous footprinting exercise encompassing scopes 1, 2 and 3 is vital for identifying carbon hotspots, allowing retailers to prioritise reductions for key emissions sources. This assessment can allow retailers to understand the scale of emissions coming from various parts of their value chain, and also to assess the relative impacts of carbon reduction interventions.

The footprint must be comprehensive in scope – and while levels of detail and data availability may vary, especially for smaller retailers, it is important that all significant emissions sources are covered.

Figure 4.3 below is taken from IKEA’s sustainability report, and follows Figure 2.1b by showing an example of a comprehensive Scope 1-3 carbon footprint. This example shows how the detailed baseline footprint (FY2016) has also allowed tracking and recording of progress across a number of different value chain stages, over time. 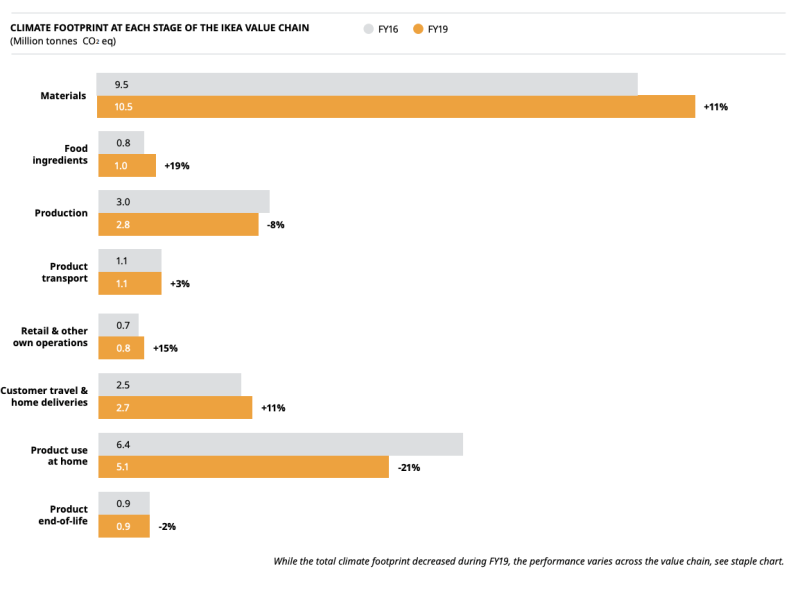 The results of the carbon footprint can then be used to inform the setting of targets that are ambitious yet realistic. Retailers are encouraged to use the Roadmap’s net zero targets, as specified in Section 3, as guidance to inform their own decarbonisation agendas.

Retailers should also set interim science-based targets. These targets can be formally set with an independent third party, or designed internally by retailers. Independent third party verification is preferred (e.g. with SBTi), however for smaller retailers especially this can be more difficult given the resourcing required.

The key for those designing targets internally is that the level of ambition must be science-led and in line with Paris climate goals of 1.5°C warming, and that the focus must be on the major emissions hotspots as identified during the carbon footprinting exercise. Examples of retailer SBTs can be found in Section 4.1.

A.   Given the typical profile of emissions from retail, engagement with top suppliers on climate is an essential activity. Using the carbon footprint analysis, a list of suppliers can be drawn up, ranked based on relative contributions to the retailer’s value chain carbon footprint. For many retailers, there are close ‘partnership’ arrangements with key suppliers, under which circumstances decarbonisation work can become a shared endeavour. In some relationships suppliers may look to the retailer for leadership and direction, while in others the supplier may be expected - and be best placed - to drive actions.

B.    Larger retailers may consider collecting manufacturing greenhouse gas data from major tier 1 suppliers. The scale of emissions from tier 1 manufacturing will vary by product type, but the benefit of this route is the accessibility of such data and – if implemented effectively – potential to nudge suppliers to lower carbon operations.

C.    Similarly, retailers may wish to work with top suppliers to help them to adopt net zero and science-based targets. There are a range of options for this route, as presented in Section 4.1

4)   Actively participating in sectoral and other external initiatives

Retailers can accelerate progress on climate action by joining sector-wide initiatives, facilitating knowledge sharing, alignment with best practice, and creation of a collective voice to lobby for key climate issues. The Climate Action Roadmap will be one such programme for the sector, and a number of other key initiatives are referenced across the document. Work to reduce emissions relies on the momentum from collaborative action.

Retailers can accelerate progress on climate action by joining sector-wide initiatives, facilitating knowledge sharing, alignment with best practice, and creation of a collective voice to lobby for key climate issues. The Climate Action Roadmap will be one such programme for the sector, and a number of other key initiatives are referenced across the document. Work to reduce emissions relies on the momentum from collaborative action.

Once greenhouse gas data has been embedded into core business decisions, retailers will have the opportunity to maintain and update data, reporting and targets, with increasing levels of ambition as time progresses. Retailers can also begin to make more significant operational changes, such as implementation of a rising internal price of carbon and development of a clear and informed strategy for carbon removals and offsetting.

A.   Retailers should look to set an internal carbon price appropriate to their business. The UN Global Compact is currently calling for companies to set a price of no less than 100 US Dollars (currently £78.46) per tonne of carbon, over time. Many companies are looking to achieve this by starting with a lower carbon price (in the region of £20-30), and raising it over time. Some companies choose to make public carbon pricing commitments, either individually or via initiatives such as CDP, while others use it internally to drive change.

B.    Early retailer experiences have suggested that internal carbon pricing is most effective when associated with tangible costs – i.e. rather than simply using the cost of carbon as a shadow price, business units within the company can be actively ‘charged’ the cost of carbon related to their carbon impacts. The funds raised from this cost of carbon can then be used to fund climate interventions and climate-related capital investments, such as renewable energy installations, for their own operations or into the supply chain.

A.   As discussed in Section 4.1, carbon balancing through offsets is part of achieving net-zero, but must not be prioritised over mitigation and reduction of emissions. When looking to offset, retailers should first quantify carbon offset requirements by assessing carbon footprint hotspots and identifying hard to abate emissions sources.

B.    Once offset requirements have been quantified, retailers can then look to identify projects for offsetting greenhouse gas emissions. Guidance for selecting offsets can be found in Section 4.1, and further guidance is also available in Second Nature’s Carbon Markets & Offsets Guidance. Retailers should ensure that purchased offsets are recorded separately to emissions reductions, to avoid mitigation deterrence.

Share
Print
Back to the top
Previous 4.2 Key initiatives
Next 4.4 For government