For the retail industry

The following milestones indicate good practice measures that will help the industry to reach net zero:

Immediate action is required for the industry to begin the decarbonisation of physical sites. While the priorities will vary based on the type of retailer, the type of premises occupied, whether the property is owned or leased and the work already undertaken, the following recommendations offer an entry point for retailers in the creation of programmes to mitigate greenhouse gas emissions from sites.

In retail, heating, lighting and refrigeration are the largest site-level energy consumers on average, but an individual business’s emissions footprint could vary considerably from the norm. The best way to target investment and effort in pursuit of reduced site emissions is to monitor the footprint of operations. Robust tracking and reporting allows retailers to plot out critical intervention areas. To reduce administrative burden, retail businesses can seize on existing requirements for reporting energy use and emissions – for example, large retailers can leverage Energy Savings Opportunity Scheme (ESOS) reporting requirements to map improvement areas, and retailers that rent premises can request Energy Performance Certificate information from landlords.

The most dramatic whole-building emissions reductions are available in the planning phase. New builds represent the opportunity to utilise cutting edge low-carbon design and construction practices. The UK Green Building Council offers a specialised framework in their guidance for Net Zero Carbon Buildings.

This approach also requires acknowledging the complexities of landlord-tenant relationships. Retailers can work with landlords to help ensure their compliance with the Minimum Energy Efficiency Standards, or forge more collaborative approaches to sharing cost and responsibility for energy efficiency improvements.

Missguided has significantly reduced energy usage through a review of their Energy Savings Opportunity Scheme (ESOS) recommendations. The retailer has implemented 100% of practicable actions from the ESOS, including retrofitting 350 light fixtures with LEDs. Thanks to much lower energy demand, Missguided expects the investment in efficient lighting to be repaid within two years.

Missguided has also been able to reduce energy use and carbon emissions through simple behavioural measures, such as reviewing timer settings, turning off electrical items at night and changing meeting room technology. A change in printing policies has additionally reduced printed paper waste by over 80%

LEDs consume approximately 15% of the energy of halogen bulbs while outputting the same amount of light – see Figure 5.3a. This efficiency improvement indicates the saving available from a technology switch, with further savings possible by optimising when and how lighting is used (e.g. through PIR sensors and timers). 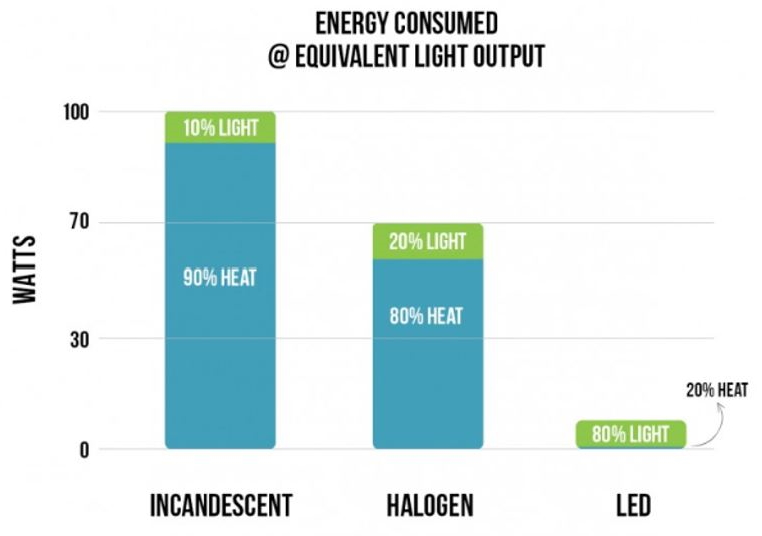 While retail was one of the first sectors to invest in LED lighting (because of the significant energy and cost savings), significant further opportunities exist for the industry to transition as a whole.

Sainsbury’s plans to install hundreds of thousands of LED fixtures in more than 450 stores by the end of 2020 and has committed to lighting all stores entirely with LEDs by the end of 2022. The retailer expects the adoption of all-LED lighting to reduce lighting energy consumption by 58% and reduce emissions by 3.4% annually. Sainsbury’s ambition is to become the first grocery chain in the UK to use exclusively LED lighting – in new builds, as well as by retrofitting all existing stores. 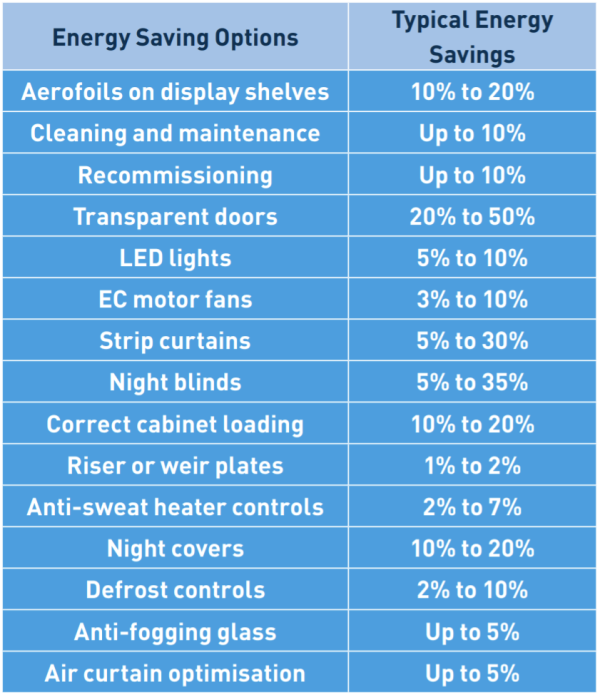 Figure 5.3b: Refrigeration technologies for energy savings, from The Carbon Trust

See the Refrigeration guide to energy and carbon savings opportunities from the Carbon Trust for detail.

Installing renewable energy technologies (mainly rooftop solar, but sometimes wind, storage capacity and various low carbon heating technologies) on company-owned premises. These can either be entirely owned by the company or owned by a supplier who manages the operational aspects and sells the energy to the company. If the company owns the technologies themselves they can sell any excess energy generated back to the grid.

Many different arrangements can be made, but essentially the company enters into a direct contract with an offsite energy generator. The generator can either directly provide electricity to the company (via a Private Wire PPA), or the company can consume grid energy and the generator can provide renewable energy to the grid to match this consumption. There are various models for this (e.g. sleeved PPAs with an intermediary energy retailer, or virtual PPAs where many companies are aggregated to match one generator) but they all generally involve agreement of a fixed price for energy for a long (5-25 year) time period.

When a renewable energy generator sells electricity to the grid, the generator receives an attribution certificate – known in Europe as Renewable Energy Guarantees of Origin (REGOs). REGOs can be sold separately to the physical energy, and the purchaser who buys and ‘retires’ the certificate can claim to have bought a unit of renewable energy. Thus a company can buy grid energy as usual, and then buy an equivalent number of certificates to match this consumption and green their energy. There are different REGO equivalents in other parts of the world, for example RECs in North America.

Retailers can also source energy from green energy retailers, who can provide energy through a mix of their own generation sites, PPAs and REGOs.

For accounting purposes, all of the options outlined above can be considered zero-carbon, renewable electricity. However, there are varying degrees to which each of them actually results in increased renewable capacity and/or lowered emissions. This is because:

Given this, the following hierarchy is currently seen as ‘best practice’:

Figure 5.3c: Hierarchy of energy use and procurement

The RE100 initiative provides the following guidance on the best practice for retailers to consider when sourcing renewable electricity:

Note that this list is ranked from the most impactful to the least impactful procurement method in terms of new renewable capacity brought into the grid.

The Dutch Wind Consortium comprising of AzkoNobel, DSM, Google, and Royal Philips made news in 2016 when it announced that it had executed two utility-scale, offsite wind PPAs as a joint venture. While not the first of its kind, the Consortium is noteworthy because it brought together four major players already active in the corporate renewables marketplace.

In this aggregation model (variously known as a buyer consortium or club), corporate buyers unify to achieve similar goals: aggregate their energy offtake, achieve an economy of scale, and contract together to optimize energy prices and the offtake profile. The aggregation model also allows for the pooling of resources and development of purchasing models that are easily replicable.

In May 2013 M&S opened a 900,000 sq ft distribution centre in Castle Donington, Leicestershire. The site was built with M&S’ Plan A in mind and features Europe’s largest solar wall - a sun-facing wall that absorbs solar energy and releases it to help heat the building. The facility is carbon neutral and has been part-built using concrete from a former power station. None of the waste from the site has gone to landfill.

The SolarWall® air heating system is 4,330 m2 (46,000ft2) and will heat and ventilate the enormous building using solar energy, instead of fossil fuels. The M& system is expected to provide energy savings of 1.1GWh, resulting in the reduction of over 250 tonnes of carbon dioxide each year.

For the UK retail industry to hit net zero both the operational footprint of sites and the lifecycle emissions embodied in the construction of buildings will need to shrink rapidly. These changes will need to be supported by the rapid decarbonisation of the UK energy system and systemic changes to ensure the deployment of low-carbon heat. It should also be noted that existing buildings and new builds will face different challenges in the net zero transformation.

To support long-term progress in decarbonising shops, warehouses and other buildings across the retail value chain, retailers can:

Share
Print
Back to the top
Previous 5.2 Key initiatives
Next 5.4 For government