Retail sales run out of fuel

Helen Dickinson OBE, Chief Executive | British Retail Consortium
“September saw the slowest retail sales growth since January, when the UK was in lockdown. There are signs that consumer confidence is being hit as the fuel shortages, combined with wetter weather, had an impact in the second half of the month. This had a bigger effect on large purchases such as furniture and homeware. In-store purchases regained ground, and sales growth continued to strengthen for footwear and fashion, particularly formalwear with many workers returning to the office this autumn. While online sales were down on the previous year, they remain significantly above pre-pandemic levels, reinforcing the permanent changes in consumer behaviour.

“An uncertain backdrop and slower growth means the fourth quarter is looks challenging as the economic recovery is dependent on strong retail sales during the festive season. Retailers, farmers and manufacturers are already making preparations to ensure enough food and festive gifts move through the supply chain in time for Christmas. Unfortunately, the lack of drivers is hindering these preparations and increasing costs, which will eventually be reflected in higher prices. Retailers are working hard to recruit and train thousands of new British drivers, but in the interim Government needs to urgently extend its visa scheme to address the shortfall of 90,000 drivers. Without swift action, customers face disruption and frustration this Christmas.”

“September is traditionally a strong month for UK retailing as it’s back to school month, and in addition this year back to office purchases dominated sales as consumers shopped for new clothes and footwear as many headed back to their workplace for the first time in 18 months.

“Overall, the slowdown experienced over the last few months continued in September and the high street saw less than 1% growth with sales falling back across every category other than apparel and beauty, while online sales fell back by -2.2% compared to September 2020 - although online penetration rates remained significantly above pre-pandemic levels.  Growth in food and drink sales was muted at 0.26% and grocers will be hoping that with Halloween and bonfire night falling over weekends, consumers will be planning gatherings involving lots of food and drink to help boost sales in the coming weeks.

“Fuel panic buying bought into sharp focus the impact supply chain bottlenecks and labour shortages can quickly have for consumers. The energy crisis is set to have further impact on inflation levels, putting pressure on household spending and retailers will be hoping for some good news from the Chancellor in his Budget to help them manage rising costs.

“As we run into the crucial Christmas shopping period, retailers continue to face staffing pressures and supply chain issues, with challenges getting product into the UK and getting goods in to customers‘ hands.  This may feed into limited availability of certain products and the spectre of price rises remains as retailers pull out all the strings for Christmas.  Consumers are expected to start shopping earlier to bag those items already being reported as potentially out of stock by December and successful retailers will have to work very hard to ensure the right availability of the right product at the right price to satisfy the requirements of an ever more demanding customer.”

“With no big calendar events to drive sales, the food and drink sector put in a lacklustre performance in September. It was an uneasy month for shoppers, with a continual flow of news around the availability of food and fuel; sales slowed compared to August ‘21 and were slightly down year-on-year. However, performance is still significantly elevated compared to the pre-pandemic period of September ’19.

“Driven by cost-of-living fears, IGD’s Shopper Confidence Index recorded its largest monthly decline in September, reaching its lowest level in a year. Concern around food price inflation has now reached its highest level since March ’13, with IGD’s ShopperVista revealing that 85% of shoppers expect food and grocery prices to get more expensive in the year ahead, up from 79% in August ’21. With inflation rising and plans for increased taxes, 31% of shoppers expect to be worse off financially in the year ahead compared to 22% in August.” 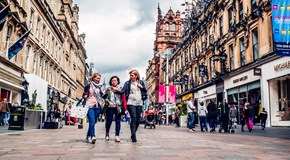 Time to cut the 'shops tax'

Cards now account for more than four in every five poun…