The number of people on furlough in the UK rose in January to 4.8mill up from 4.0mill in December, a 21% increase. With the imposition of a new national lockdown, this was expected. And while that is way below the extraordinary figure of over 9mill during the first lockdown, it nevertheless accounts for an astounding 15% of the UK workforce.

In retail, we estimate that furloughs increased from about 400,000 in December to 600,000 in January, or a 42% rise. With the closure of non-essential retail, this also doesn’t come as a surprise. We expect the number of furloughs in retail to remain roughly constant until April, when shops may open again. 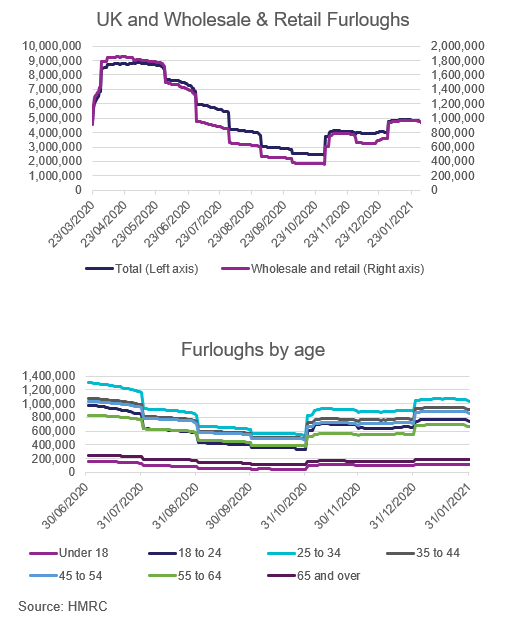 There are fewer people on furlough now compared to the first lockdown because the economy has learnt to cope with health restrictions and can operate at a higher capacity. But it’s also because some people were let go. As shown in the below graph, redundancies peaked in September (when they were over three-fold higher than in April or May) and remained high in November. It’s noteworthy that redundancies have been rising at a faster pace during the pandemic than they did during the financial crisis, even with the strong government support in place. This underlines both the severity of the shock to the economy and strong headwinds ahead. If the financial crisis is anything to go by, we’re in troubled waters. Unemployment reached over 8.2% in 2012 only, as unemployment responds with a lag, and it took seven years to gradually decline to 4%.

The furloughing scheme is due to expire at the end of April. It’s expected that some kind of fiscal support will continue beyond April, but government support cannot go on indefinitely. The rollout of the vaccination program has brought hopes that renewed optimism would release pent-up demand and support a rapid economic rebound.

However, there are concerns that the labour market will see a delayed recovery, as both covid and Brexit are triggering sectoral shifts. Long-term unemployment is also worrying. The Resolution Foundation found that 1.9mill people had not worked for at least six months in February, and furlough data show that younger people, in the 25-34 age category, are the most likely to be furloughed. Long-term unemployment means lower lifetime earnings for those individuals and a significant loss of productivity for the wider economy. There’s an erosion of skills for anyone that is out of the workforce and it takes longer to find a job after being unemployed for a long time. 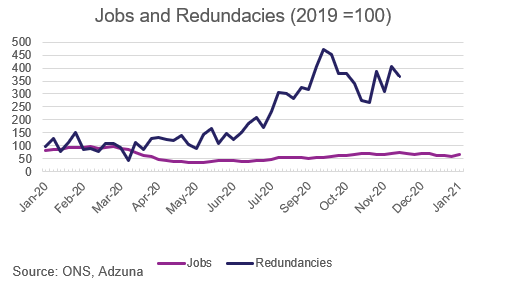 Return to growth despite lockdown

Optimism is in the air

Retail furloughs made up 12% of UK furloughs in Februar…

Upward inflation pressures on the horizon

Six Years’ worth of growth wiped out in 2020