Helen Dickinson OBE, Chief Executive of the British Retail Consortium, said:
“It comes as no surprise that the number of shuttered stores in the UK continues to rise, after retailers have been in and out of lockdown for over a year. While vacancy rates are rising across all retail locations, it is shopping centres, with a high proportion of fashion retailers, that have been the hardest hit by the pandemic. Almost one in five shopping centre units now lie empty, and more than one in eight units have been empty for more than a year. Retail parks have also been impacted from the loss of anchor stores and their vacancy rate is rising quickly. The regional contrast is stark – the south of England, including London have seen lower vacancy rates, while the North, where disposable income is lower, continues to have a higher proportion of closed shops.

“The vacancy rate could rise further now the Covid-19 business rates holiday has come to an end. The Government must ensure the ongoing business rates review leads to reform of this broken system, delivering on its commitment to permanently reduce the cost burden to sustainable levels. The longer the current system persists, the more jobs losses and vacant shops we will see, hurting staff, customers and communities up and down the country.”

“Vacancy across GB high streets, retail parks and shopping centres continued to rise in Q2 2021, however the increase was half that of the same period in 2020, alluding to the fact that, like the pandemic, there is hope that we are over the worst. After an initial flurry of CVAs, closures due to consumer behaviour shifts and cost-cutting exercises, retailers are now starting to dust themselves off with cautious optimism, keeping a close eye on the rapidly changing infection rate and the pace at which vaccinations are taking place; two measures that could seriously de-rail recovery efforts should they not go in the right direction.

"Vacancy now sits at the highest rate ever recorded by the Local Data Company. With appetite for new space increasing but still modest, there will simply never be enough demand to meet the supply. The property market will be forced to think of more creative ways to utilise this space, to avoid exacerbating the already high rates of long-term voids across our retail destinations which are not only unsightly and costly for landlords, but also have a negative impact on surrounding stores.”

Cards now account for more than four in every five poun…

Without rates reform, four in five retailers will see s… 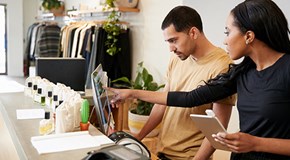 Letter to PM on Apprenticeship Levy